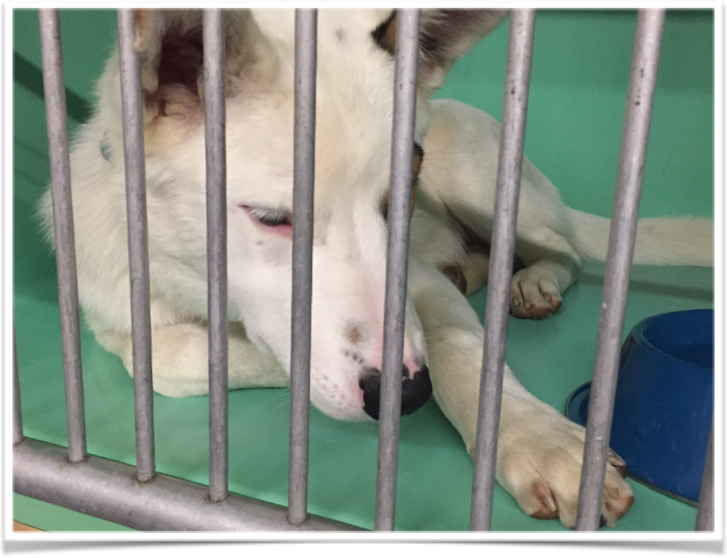 As I look back over the last couple years, I can still remember the look on Sam’s face when he first engaged with Birdie.  She arrived at Midwest Animal Rescue and Services (MARS) on a warm Saturday night, June 3, 2017 from Oklahoma.  I had asked Sam to join me at this transport after he had to surrender Tank, the first dog he was paired with.  Tank failed as Sam’s service dog in training after becoming reactive and aggressive towards people and other dogs as a result of serious flaws in a training model we had been implementing.  We all grieved that failure, so having Sam engage with the initial process of screening for his next dog seemed a likely way for him to embrace the possibility of another dog to love and work with. My initial reaction when they locked eyes was “Oh no, this dog is too young and doesn’t meet our criteria.”  Little did we know, Birdie would be the beginning of a whole new thought process behind how we screened dogs.

Sam immediately took to Birdie and it soon became obvious that it was mutual for Birdie, as she found herself curled up on his lap awaiting her medical screening from the vet techs at MARS.  By June 15th,  Birdie was being screened by Lindsay, our trainer, and by June 16th, she was out with Sam and Lindsay at a local Home Depot.  As a team in the early stages of screening,  they easily navigated the sounds and obstacles of the store, and by the look on both their faces, we knew immediately that we would be moving forward with this girl as his potential dog.

Sam and Birdie spent the next several months working together as a team after Birdie met Sam’s family and they spent time as a foster family.  A pivotal training moment, learning how important any dog joining a veteran family was going to be.  The dog’s relationship with the rest of the family would be critical for the success of the team.  Sam would be distinguished as the handler by providing all the “needs” for Birdie, however, Sam’s family would be included in all of Birdie’s “wants.”  Being openminded to this younger dog opened the doors for Project Delta to learn so many things as this team trained.   The initial extensive screening process was working and this team was out in public with Lindsay and creating “firsts” for Sam on a constant basis.

These “first’s” were first’s for Project Delta as well.  We were basically  creating an program outline for future teams.  This included networking and navigating with the community which they trained in which soon began to demonstrate how we would differentiate ourselves from other service dog organizations.  Sam and Birdie went to the Mall of America, they went to movie theaters, coffee shops,  shopped at Target and to a host of other businesses.  Sam was able to attend a Timberwolves game after multiple training sessions at Target Center prior.  January of 2018, he was acknowledged  by the Timberwolves for being a combat medic in the army in front of tens of thousands of people.  Unless you actually knew he had PTSD,  it couldn’t  be seen because there he was, center court with Birdie by his side.  There were no words to describe the pride Project Delta felt for this amazing team who had been working so hard. It wasn’t long before Sam was able to navigate his life with a sense of calm he hadn’t experienced in a long time.  It wasn’t perfect,  but Birdie had become his partner for the unseen disabilities that so many veterans today live with on a day to day basis.

But like anything, setbacks can and will occur.   For an unknown reason at the time, Birdie began to demonstrate signs of pain by yelping at random times.  She would start to hide under Sam’s bed and it was a challenge to get her out.  This was unpredictable for the most part, but it began to cause great stress and anxiety for both she and Sam.  Between Lindsay, Sam and a team of veterinarians and a whole host of testing, finally it was determined she has a cervical disc issue.  This put a halt to training and an emotional setback for Sam. Birdie had some associations with movement and training and began to regress.  But after a period of time and healing, Lindsay and our new trainer on board, Emily,  a behavioral modification plan was designed to get Birdie and Sam back to training.  Slowly over time and with a lot of patience, Birdie is returning to her baseline personality and desire to be in public with Sam.

To date, Sam and Birdie continue to train.  They are back to working on skills and preparing for the CGC.  Birdie provides many skills for Sam and cues are attached to them.  Their love and dedication to each other and their ability to adapt and overcome obstacles reminds me and the Project Delta people why we do what we do. Both these demographics have a story.  Both suffered unspeakable atrocities.  But it hasn’t stopped either from working to be the best versions of themselves.  Birdie is not a barrier for Sam, but a bridge.  She empowers him and helps keep him on a level playing field.  There is unconditional love going in both directions and nothing pleases us more than to be a small part of it.