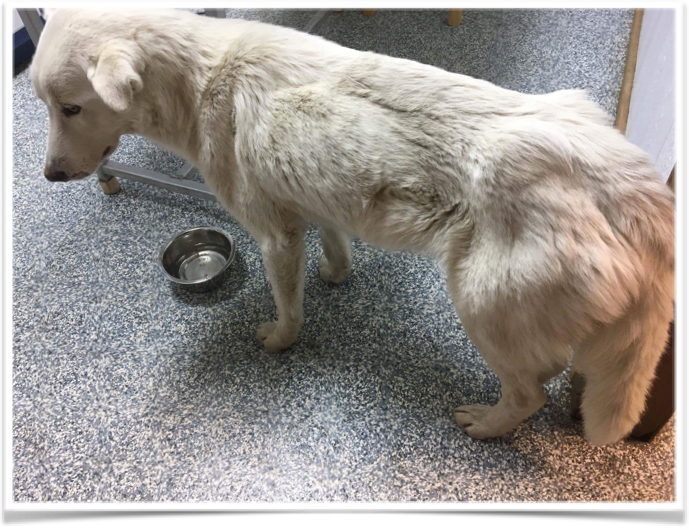 The story about Chris and Sasha began long before they met and Chris started fostering her as his potential service dog partner.  Chris of course honorably served his country in the Navy.  Out of respect for Chris personally,  I will limit the details to why he needs a service dog to; another veteran who transitionally struggles with being in the civilian world due to military related PTSD.  With permission from the rescue Sasha came from, I can speak about her deplorable story of abuse and triumph. Below is Jessie Blankenship’s words describing Sasha, beginning with her rescue.  Jessie is the founder of The Sanctuary and Rehabilitation Rescue.

“Sasha came to us from a reservation in South Dakota.  Emaciated and dehydrated, she was days away from dying.  She was tied up in someone’s backyard, no food, water, or shelter.  We had her brought to the vet right away, pushed fluids in her, checked blood levels and got her started on some canned food.  She has absolutely flourished after lots of rest and good food, and is now up to 50 pounds.  She has met some new dog friends, and has a boyfriend.  She and Jake are totally joined at the hip.

Sasha is THE sweetest dog in the world and we really felt she was destined to do something good.  So we contacted Project Delta.  The are a MN organization who pairs veterans with PTSD with dogs to train as their service dogs.  The dog goes through a couple “job interviews” before meeting a Veteran, who has already been through the application process.  If they are a good match then the dog gets to live with them and they “foster” the dog through the training.  So the dog and the veteran learn together and get to bond right from the beginning.

Sasha has now been through her interviews and met a veteran.  They are a great match!  She goes in for her spay tomorrow and once she is healed up will get to start the next leg of her journey and life as a PTSD service dog!!!

We could not be more happy and excited for this wonderful girl!  And we are thrilled to partner with Project Delta and hope for many more great pairings down the road.  Thank you Patti and Lindsay for all you guys do for our veterans and these great rescue dogs.”

It is critical to appreciate the beginning to understand the magnitude of what happens next for this team.  The men and woman that serve our country including Chris, do so knowing they will see and experience things the civilian world only see in movies or will read in a book.  Often, it is the same for a dog that finds his or herself in a rescue or in a shelter.   Just like humans suffering from trauma and PTSD,  dogs can find themselves in similar situations that effect them both emotionally and physically just the same way as their human counterparts.

Sasha was blessed to land in the hands of Jessie.  She would randomly send us video’s and pictures of Sasha in many different scenarios and based on those images, we should have stopped our search for Chris’s dog right then and there.  However, prior to Chris finally meeting Sasha, we introduced him to three other dogs.  While he desperately wanted to pair and begin his service dog journey, these dogs  simply were not “the one.”  And there was a reason for that.  He hadn’t met Sasha.

February 2, 2018 Chris and Sasha met for the second time.  Jessie brought her down from near Duluth.  Like expected, Sasha demonstrated exactly why she was a service dog candidate.  She was calm but inquisitive and respectful of their resident dog. That day , Chris and Sasha bonded for what has become an inseparable relationship.  We learned later just how difficult it was for Jessie to leave Sasha.  She herself had bonded with Sasha and her efforts to care and heal this previously neglected and abused dog left a lasting paw print in Jessie’s heart.  However, like any dog entering a home, Lindsay prepared Chris and his family about what to expect during the future weeks.  But it wasn’t long before Chris and Sasha began working on basic training skills and soon were navigating in public.  The change in Chris was clear to everyone, particularly his family.

Chris has been dedicated to training ,and committed to Sasha from day one.  He has once again experienced life with his family that hadn’t occurred for years and years.  He joined them at the Minnesota State Fair since leaving the military.  He is able to attend his children’s school events, go to the Mall of America, go out to eat at restaurants and attend church with him.  With the help of Lindsay, and hundreds of hours put into training, Sasha has learned skills with cues that define her as his service dog.  She has given Chris the opportunity to live his life with her as his “bridge.”  She has put him on a level playing field.  She has given him the confidence to start a new job where she can join him, when his previous employer fought him on every level to allow Sasha accompany him at work. Sasha isn’t a cure for Chris’ PTSD, she is an additional tool that empowers him when PTSD is trying to complicate his life.

Chris and Sasha positively impact everyone they come in contact with.  They exemplify what a successful service dog team looks like when a dog enthusiastically serves and the veteran is accountable, committed, and determined to get better.  Being a part of this amazing teams’ journey has been such an emotional win for Project Delta AND a testament to the power of “a dog.”