That someone very special…. 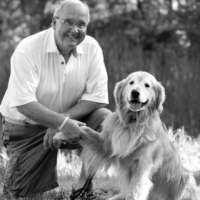 Every so often, someone incredibly special comes into your life and changes it forever.  I was introduced to Jerry Stahl, the father of my very first trainer at a Leech Lake Legacy fundraiser in June of 2016.  We hadn’t officially launched Project Delta and I was brand new to the nonprofit world.  I spent my days networking and learning all I could about both sides of my future nonprofit so meeting and talking with Jerry was an instant connection and I knew I had been introduced to not only an extraordinary man, but someone who could become an incredible advisor.  Jerry knew the in’s and the out’s of the business and nonprofit world and had served on nonprofit boards.  His love for our service men and women as well as the dog, made Project Delta a good fit for him.  From day one I enjoyed our business meetings as well as learning from him as a parent.  Jerry was instrumental at assisting me to get Project Delta successfully off the ground.  He soon became a resource for every question from a business standpoint that I had.  To this day, his support and belief in me is one of the reasons I remain afloat.